An RMC Paladins graduating senior and a fresh-faced rookie were among OUA honourees when the league announced their major awards and all-stars for the 2021-22 men’s hockey season on Tuesday afternoon.

Each U SPORTS conference puts forward the player who best exhibits outstanding achievement in hockey, academics and community involvement for the national Randy Gregg Award. 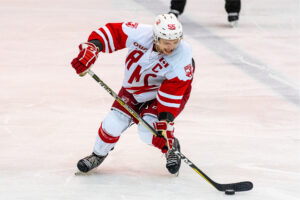 “Throughout my time in junior hockey, I was always a huge advocate of for guys getting to go out and get involved with your respective communities, whether it’s school visits or going out for practices, or like when I got involved with the Alzheimer Society,” Murray said. “I don’t think guys should be looking to do any of this with the hopes of being rewarded for it; the most honest way and the best way is to simply do it because it does make a difference in people’s lives.”

A stalwart defenceman for the Paladins and a strong student in the RMC Bachelor of Military Arts & Science program, Murray has also found ways to become heavily involved in the local community since moving to Kingston to play for the Frontenac’s, which has included volunteering with the Alzheimer Society of KFL&A.

The cause is a personal one for Murray, whose grandfather started suffering as the young hockey player was breaking onto the OHL scene.

“When the disease really started to take its toll, I decided that I’d like to give back and help people who are in the same position,” he said. “It was therapeutic in a way. And the staff there [at the Alzheimer Society of KFL&A] do not get anywhere near enough as what they should be getting paid or the recognition they deserve.”

Within the hockey community, Murray has been the team lead for Hockey Gives Blood, and has also enjoyed giving back through the Greater Kingston Jr. Gaels.

“I’ve always loved the idea of coaching kids and trying to help them find that same love for the game of hockey that I was able to find at that age thanks to coaches like my dad and other hockey parents,” Murray said. “Being able to go out and instill that love for the game and help to grow the new age of hockey player has been extremely rewarding.”

Murray also shows his leadership on the military side, as a Corporal in the Canadian Army Reserve and member of the Princess of Wales’ Own Regiment.

“The experience of being in the Reserves has been phenomenal,” he said. “I think that the Reserve option is something that all major junior guys—not just at RMC—that are graduating from any league in the CHL should be considering.”

“The stuff that I learned and am going to be able to take away are things that I couldn’t have learned anywhere else. How, not only to conduct yourself as a soldier, but as a human being as well, is a huge thing that it teaches you.”

Broaders, a native of the town of Tilting on Fogo Island, Newfoundland, and a fellow Reservist at PWOR, joined the Paladins this season from the Yarmouth Mariners of the Maritime Junior Hockey League. In total, Broaders spent three years in Yarmouth, including a run at the Fred Page Cup in 2018-19, where he faced off against now teammate Noah Rowe (Nepean, Ont.). The left-handed forward also spent a year split between the Ottawa Jr. Senators and the Smiths Falls Bears of the Central Canada Hockey League.

This year at RMC, Broaders averaged a point in every other game he played, providing some consistent offence in his first season with the Paladins.