For the 2018/2019 school year, the CMR Saint-Jean Band was comprised of fifteen officer cadets. Musical instruction was conducted weekly by Mr. Philip Rempel during the fall and winter sessions at CMR Saint-Jean. The Band contributes to the general well-being of officer cadets while fostering their interest in music and allowing them opportunities to play in high profile campus events.

The funding received by the RMC Foundation this year provided the officer cadets with musical instruction, general maintenance of instruments, replacement reeds, a music stand storage system in the music room and a new set of bagpipes. The support from the RMC Foundation allowed the CMR Saint-Jean band to continue operating while offering a broader choice of instruments for students to play.

During the 2018/2019 school year, the CMR Saint-Jean Band performed at several events such as the 2018 Dîner de la troupe, 2018/2019 convocation and the end of year graduation parade. The music programme has continued to grow at CMR Saint-Jean and has come a long way since the college closure in 1995. With continued support from the RMC Foundation, the musical development of our officer cadets will be expanded in addition to enhancing CMR Saint-Jean Band capabilities. With the growing interest and involvement of our officer cadets, participating in contests and activities involving military music could become a reality for them in the near future. 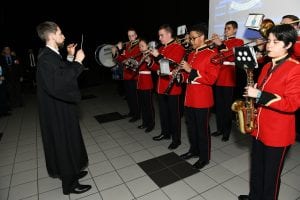