The Howard University Model NATO Conference is an international academic competition held in Washington, DC and involves universities from Europe and North America. This highly prestigious event, referred to by the Principal as the academic equivalent of the Sandhurst Competition, pits RMC Cadets against over 25 other international universities in a challenging and academically rigorous competition.

In the past 9 years, RMC Cadets have won numerous individual leadership awards at this competition and the RMC team has been awarded the top Delegation prize in six of the past seven years and placed second in the other year. There is no question that participation in this event positively contributes to RMC’s reputation for excellence and serves to reinforce the quality of the educational achievement of the Cadets.

Your donations to our Truth, Duty, Valour Fund for current needs will provide the $15,000 a year in funding needed to fund academic competitions such as this. 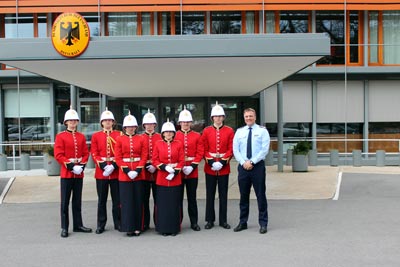 “This year, RMC represented Germany in the competition and had the pleasure of visiting the German Embassy and talking with German Air Force Colonel Trautermann, the Assistant Defence Attaché. We learned about German foreign policy as well as current policy positions within the NATO Alliance. Attending the conference allowed us to practice NATO parliamentary procedure, familiarize ourselves with the foreign policies of many Canadian allies, tour the US capital, and to represent the Royal Military College of Canada at an international level. Thank you for your support in helping to send us on this worthwhile event each year”